·
0 Be the first to favourite this.

We are creating a collaborative sound walk. You are invited to participate in a project involving scores or participants, with the aim of creating a 30-day sound walk.

Walled Ground, a Free Zone for Seedlings / a path is made by walking an ongoing project by Hans van Lunteren and Ienke Kastelein

An ongoing project by Hans van Lunteren and Ienke Kastelein

In 2016 we started an ecological project in the context of the exhibition Hacking Habitat in and around a former prison downtown the city of Utrecht (NL).
Every first Sunday of the month since we walk the area between the wall and a canal with a group of people engaging in the project. In going we walk the high path along a wall, always in silence – on coming back we share our observations on the growth of plants.
In the end we hope that this will result in a permanent Free Zone for Seedlings, where we as humans interact with other beings in an ecological balance.

On the September 6, 2020 we made a field recording during the walk.

Background
How can a seedling, a symbol of freedom, thrive in a prison where everything is tightly controlled? For Hacking Habitat, Hans van Lunteren and Ienke Kastelein examine this interface between captivity, systems, control and letting go.
We live in a world in which more and more is regulated and controlled. Is there still room for natural, spontaneous development? Can we occupy that space for ourselves? This current, urgent question is posed by Van Lunteren/Kastelein in the ecological project Walled Ground. Seedlings are an expression of freedom in a city where every square meter is occupied. A seedling hacks the city and together with the neighbourhood the artist develops an alternative ‘hack-your-way’-route around the Wolvenplein. By means of a choreographic walk, visitors can experience the interaction between captivity and freedom.
Every Sunday between March and June 2016 , people could join the choreographic walk.

Walled Ground, a Free Zone for Seedlings / a path is made by walking an ongoing project by Hans van Lunteren and Ienke Kastelein
06 Sep 09:00 (UTC) 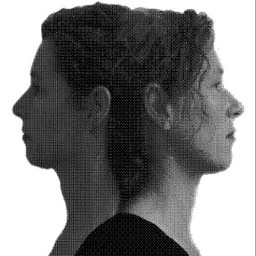 "Walk so silently that the bottoms of your feet become ears" Pauline Oliveros Artist Statement Ienke Kastelein is an interdisciplinary artist interested in perception and the senses. She is engaged in context and habitat. Hence walking and sitting ha...

Walled Ground, a Free Zone for Seedlings / a path is made by walking

Listen to the Sound of the City, Walking in Silence / Berlin, Alexanderplatz

Please Can I Have Some Sellotape