We are delighted to announce the publication of Canopy a beautifully illustrated 20 page chapbook anthology of poems and flash stories inspired by acclaimed nature writers and sold in aid of future Urban Tree Festivals. Available from our on-line shop 2020 marks the anniversary of some key poets and writers who have put nature writing […]

Is the opening line of David Fell‘s flash story “The Meet” that appears in Winter Chill, our latest anthology of flash fiction and non-fiction tales set to chill you to the bone. What lines will you cross to get what you want?  And is the outcome as valuable as the costs you have had to […]

We are delighted to announce the winners of the first poetry and short story anthology celebrating urban trees – 10 writers have been selected for their engaging pieces that will be published by Sampson Low Publishers in the Urban Tree Festival “Canopy” anthology.  They will be joining authors of stories from our Autumn Colours anthology, […]

Escape lockdown by taking a walk in a virtual world!  The Guardian newspaper has done all the hard work and lined up more than a dozen for you to try.

Walking for 5 months and covering 2,000 miles across Europe from London to Jerusalem, the Just Walk marked the centenary of the Balfour Declaration in which the British Government announced their support for a “national home for the Jewish people” in Palestine. In this episode Andrew Stuck catches up with Justin Butcher, who conceived and […]

We are delighted to announce the winners of  our most recent flash writing competition called Winter Chill.   We set out to find some chilling stories or creative non-fiction of 250 words or fewer that thrill through mystery, crime or horror and these 9 authors came up with the goods: Andrew Anderson – The Thin Blue […]

Ella Parry-Davies, a post-doctoral researcher at the Royal Central School of Speech and Drama, has been facilitating homemakersounds.org, a collection of soundwalks made with Filipina domestic and care workers employed “behind closed doors” in the Lebanon and the UK. In this interview, the ambiguity, complexity and unfairness of government immigration policy is discussed, as well as how […]

Write About Trees We are delighted to announce our new competition for writers of both poetry and prose to tie in with the forthcoming Urban Tree Festival in May. At last year’s Urban Tree Festival we had five published authors reading their nature writing, this year we wanted to host an event at which novice […]

The final line of a sonnet written by William Wordsworth depicting the coming of Autumn, could provide the preface to Autumn Colours, our latest chapbook anthology of seasonal flash stories, published in conjunction with Sampson Low and similar to other chapbooks, beautifully illustrated by Alban Low and edited by Rebekah Lattin-Rawstrone. This year sees the […]

Jack Cornish is a programme manager for the “Don’t Lose Your Way” campaign at Ramblers, the UK charity promoting walking and defending rights of way. That’s the ‘day job’, but there is much more walking in Jack than just from 9 to 5. He has walked the entire length of the British Isles and is […] 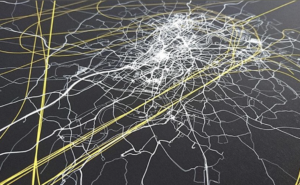 What can we say with satellite navigation and what can the technology say about us? Artist Jeremy Wood will present new work and almost twenty years of experience with GPS drawing and map making. We remember Jeremy from Sideways2012 - delighted to see he is still making great work! Event on February 12. Link for tickets

In this age of screen scrolling, push button and voice activated digital technology, can you remember when you last counted on your fingers? You may have grabbed a pen and totted up the prices on a scrap of paper, but have you used your fingers to count? Go on, take your hand away from the […]

Next weekend it is our first Seasonal Slow marathon length walk around the boundary of the Royal Borough of Greenwich.  Or at least that’s what we are laying claim to accomplish on our Winter Slow.  However, we think we need to iron out a few discrepancies and with the help of at least a dozen […]

Freezing and Finding Episode 1: With a rich, varied and immersive listening experience, in the latest of his Slow Radio Sound Walks, as the winter draws and the snows threaten, Horatio Clare follows Greenland’s Arctic Circle Trail from the west coast of the country towards the vast ice-sheet. In a series of alien worlds, the scapes are changing all the … More 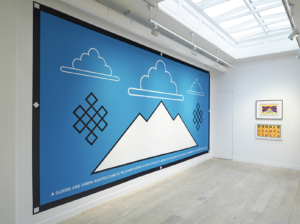 http://parafin.co.uk/current-exhibition--hamish-fulton.html The exhibition takes as its starting point the important walk the artist made over 47 days in 1973 from Duncansby Head to Land’s End – here presented as a large-scale wall text. After this major walk Fulton made the radical decision to ‘only make art resulting from the experience of individual walks’. Since then Fulton has rigorously maintained this focus, using walking as his medium and stating ‘If I don’t walk, I can’t make art’. Although only Fulton experiences his solitary walks directly, the works he presents in exhibitions and books allow us to engage with them.

If you are ever going to be caught out in inclement weather on the mountains or hills of northern England, having met Mark Reid, founder of Team Walking, Andrew Stuck can think of no other person he would rather have as his guide. Mark’s passion for the outdoors is only outshone by his desire to […]

A deep listening event bringing together a new wave of artists with field recording at the heart of their work, coinciding with the release of Fieldwave on Nonclassical and presented in association with Nature Unwrapped, a year-long series of events from Spiritland neighbours Kings Place. Hosted by Fieldwave curator Nick Luscombe, the event features talks, playbacks and appearances from Kate Carr, Iain Chambers, Dave Bamford, For Now and live performance from Tuulikki Bartosik on accordion. The release – out on cassette and digital – reflects ‘a burgeoning area of sonic creativity that has gone from a very niche area of sonic art to something much more commonplace’. It has been compiled by Nick Luscombe, Nonclassical A&R. Writing about Fieldwave, he says, ‘This rapidly expanding social phenomenon is exciting in that it both democratises the art of composition - with minimal barriers to capturing and creating new work “in the field”- and challenges how we view today’s role of a composer.’ SPIRITLAND KING’S CROSS TICKETS £10, OR £16 WITH A LIMITED EDITION FIELDWAVE CASSETTE  PRESENTED IN ASSOCIATION WITH KINGS PLACE

“There’s a lot more to walking than walking“ was the title of a presentation that Danish Architect and Urban Visionary, Jan Gehl used to give at conferences.  One of his key points was how much of walking was about dawdling, dwelling and observing all the activities going on around you.  Who was chatting to whom, […]

Join our group on Facebook and talk to other walking artists.